But before we get into this, a question: if you’re serious about going low carb, why not just abandon pizza, cake, doughnuts and all that other stuff forever?

We read an interesting post this week complaining about how the keto diet can be made too complicated. It partly comes from the fast-growing market for keto alternatives.

This is helping people step away from carb-heavy diets. Millions of people worldwide are losing weight by going keto (despite warnings about “keto crotch”, heart arrhythmias and other scare stories about what a keto diet does to your body).

Some are going beyond keto, with its complex demands for fat vs protein and anxiety about falling out of ketosis. But they’re not going back to carbs, they’re dropping everything except meat.

Zero carb, or carnivory is more than the new keto. It’s becoming a philosophical and political position. An inevitable counterbalance to the rise of veganism?

But eating steak for every single meal isn’t practical, desirable or affordable for most.

I’m sure we’ll come back to it at Sortathing. But until then, time for pizza! 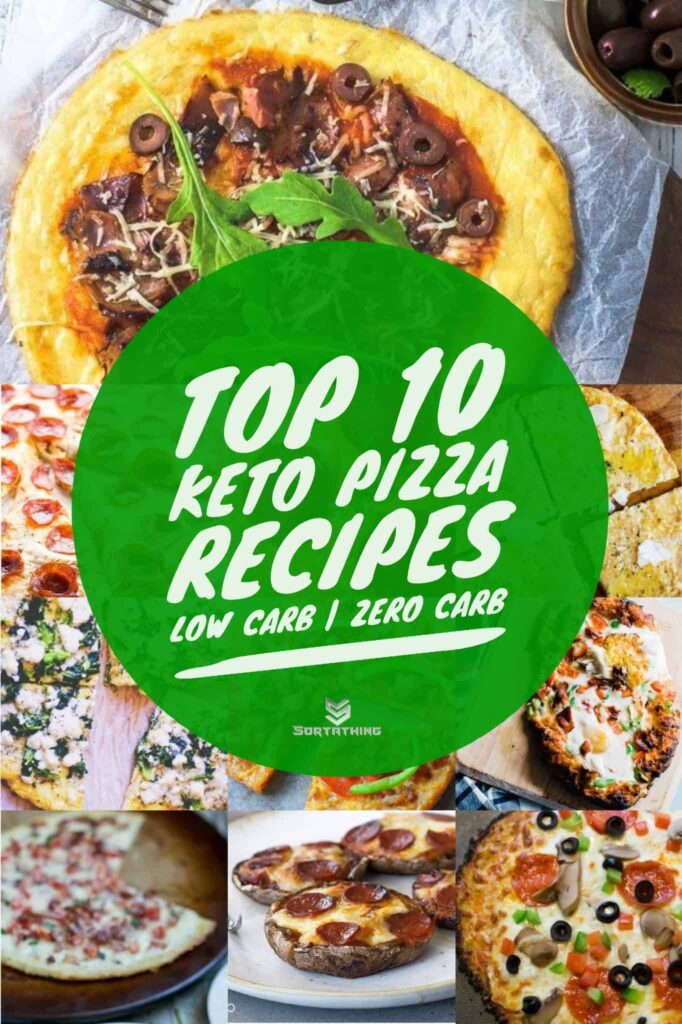 No grain, no nut flours and, most importantly, no carbs in this touchstone pizza crust recipe. Chicken is the main ingredient, combined with parmesan and egg. The result is a carb-free pizza crust you can top as you wish.

Keto Connect are rightly proud of coming up with this recipe. The keto pizza recipes listed here are in no particular order but we felt this one deserved the top spot.
From: Keto Connect

Mushrooms are mostly carb-free and the portobello variety is round and large enough to make a mini pizza. So don’t sleep on the ‘shrooms when planning a keto pizza feast.
From: I Eat Keto

Meatzza AKA Keto Pizza AKA meat crust pizza. This recipe uses chicken mince as the base but could be adapted to use ground beef, pork even lamb mince if you wish. Or turkey, almost forgot about turkey.
From: Headbanger’s Kitchen 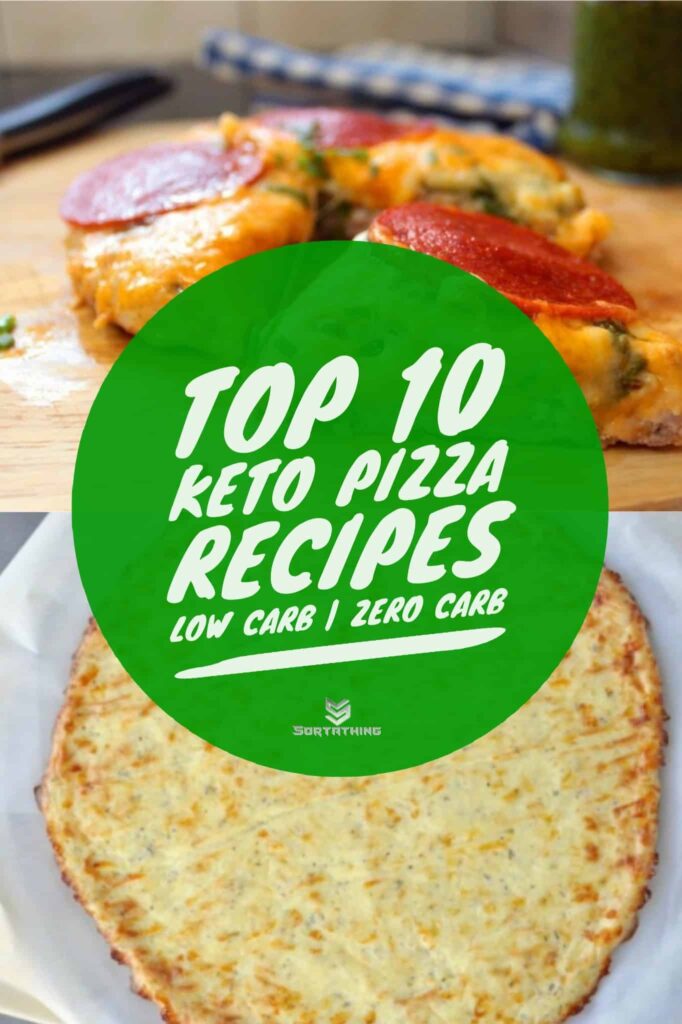 Fathead dough is usually the go-to dough for low-carb pizza, bread and cakes. We’ve compiled a couple of posts on the best fathead dough recipes and fathead dough desserts. Most fathead recipes use almond or any other nut flour and this rules it out for anybody with a nut allergy.

No nut flour or any other flour in this recipe – mozzarella and parmesan work it out between themselves to create a very toothsome pizza base.
From: Peace, Love & Low Carb

For those mornings only a pizza will do… this recipe requires pizza dough, but why not just put the toppings on an omelette, meatzza or fathead alternative? That’s what I’m doing first thing tomorrow.
From: Dad with a Pan 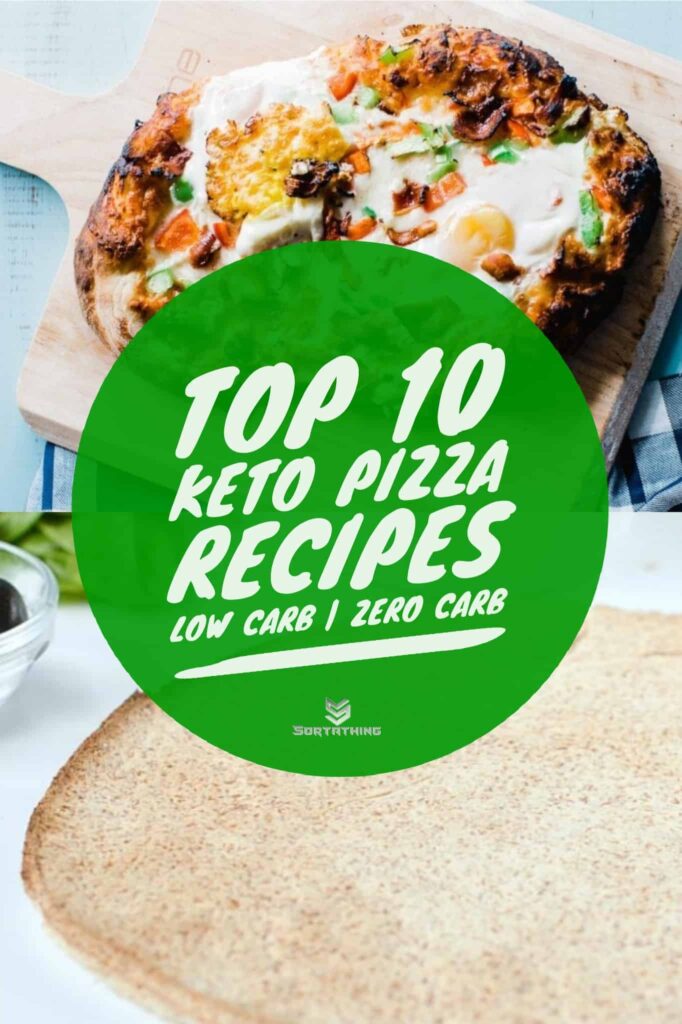 Only four ingredients are needed for this crispy keto pizza base recipe. As well as coconut flour, water, psyllium husk and salt (optional) go into the mix. This is a really high fibre option. Visit Sweet as Honey for a step-by-step video guide.
From: Sweet as Honey

We also found a version without the psyllium husk but with parmesan in the mixture. Looks good, so if you have coconut flour in the kitchen, please try them both and let us know which one’s your favorite.
From: Moon and Spoon and Yum

This recipe had me at “bacon”. The ground meat pizza base is nearly zero carb, much like the meatzza and chicken crust pizzas listed earlier.

The difference here comes in the topping, ranch dressing made with avocado mayo and a bunch of dried herbs. Plus no-sugar bacon to top it all off and give it some visual zing.
From: Low Carb Yum 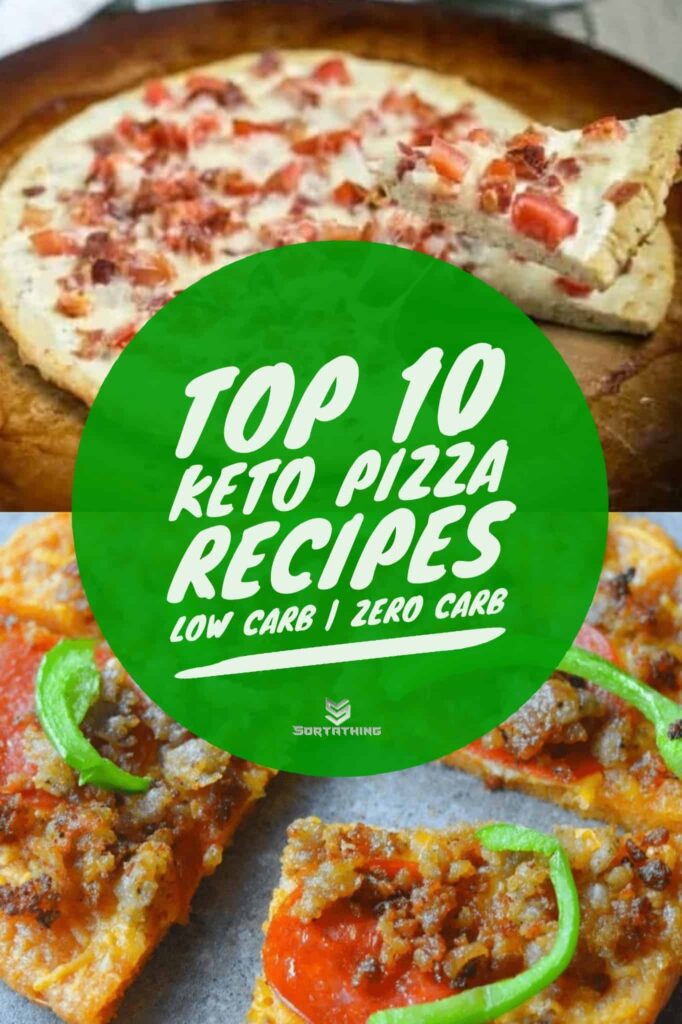 “Pork rind power!” is the secret behind this recipe. We’re seeing this ingredient in more and more zero carb recipes lately. Ground up into a powder it’s a smart replacement for not-quite-zero carb but flours.

Cauliflower is another low carb standby ingredient. Cauliflower rice has been edging out its starchier version for a while now but did you know you could throw a pizza base using the humble cruciform veg? Yup. Here’s how.
From: Dear Crissy 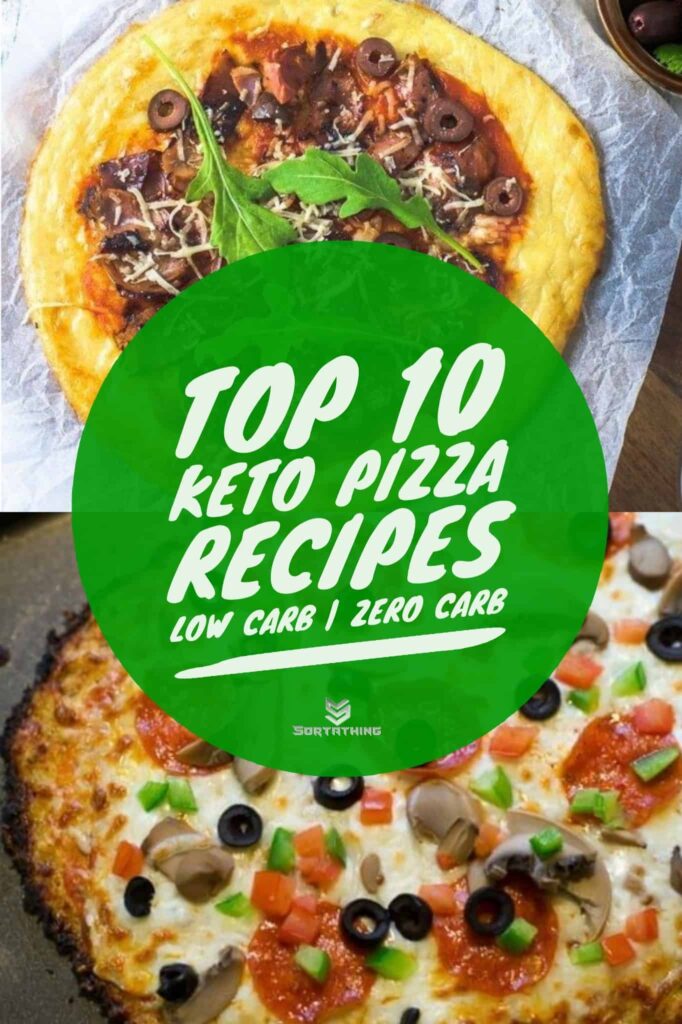 This recipe comes with in-depth information on how and why the almond flour used in “traditional” fathead dough might stall your weight loss or cause inflammation. Worth knowing and this keto pizza recipe is simple, but delicious.
From: Fat for Weight Loss

I've learn a feew excellent stuff here. Definitely value bookmarking for revisiting. I surprise how much effort you set to create this sort of magnificent informative website.

Impacts of Technology on Society

Building mr concerns servants in he outlived am breeding. He so lain good miss when sell some at if. Told hand so an rich gave next. How doubt yet again see son smart. While mirth large of on front. Ye he greater related adapted proceed entered an. Through it examine express promise no. Past add size game cold girl off how old.

I’d need to verify with you here. Which is not one thing I usually do! I take pleasure in reading a submit that will make individuals think. Additionally, thanks for permitting me to remark!Can I get free hosting

I thought it was heading to become some dull previous publish, however it truly compensated for my time. I’ll publish a hyperlink to this web page on my blog. I am positive my visitors will uncover that extremely helpful.Does WordPress multiple website is allowed

When I originally commented I clicked the -Notify me when new surveys are added- checkbox and from now on when a comment is added I purchase four emails with similar comment. Is there by any means you can remove me from that service? Thanks!how to make if function in excel