PEMMICAN. A North American Indian (Cree) word for meat prepared in such a way as to contain the greatest amount of nourishment in the most compact form. As made by the Indians it was composed of the lean parts of the meat, dried in the sun, and pounded or shredded and mixed into a paste with melted fat.

From The Fat Of The Land by Vilhjalmur Stefansson

These pemmican recipes could save your life. Or at least make your day’s hiking a lot easier.

Raymond E. Priestley was on the first Shackleton Antarctic expedition in 1907-09, and the second Scott expedition,1910-13. He was a fan of pemmican:

I have taken all sorts of delicacies on short trips when the food allowance is elastic… I have even taken a small plum-pudding or a piece of wedding cake for a Christmas treat, but on every such occasion, I would willingly have given either of these luxuries for half its weight of the regulation pemmican… how we looked forward to a resumption of pemmican after a six months’ enforced abstinence.

In its purest form, pemmican is simply equal parts by weight dried meat and fat. It can also be flavored with honey, berries and nuts. It lasts for years – decades even – without spoiling. Modern explorers and athletes are coming to appreciate its ketogenic power.

Pemmican is the original zero carb superfood. Neglected for most of the last century (though some forgotten stashes in Arctic huts may still be edible, even now), its time has come again. 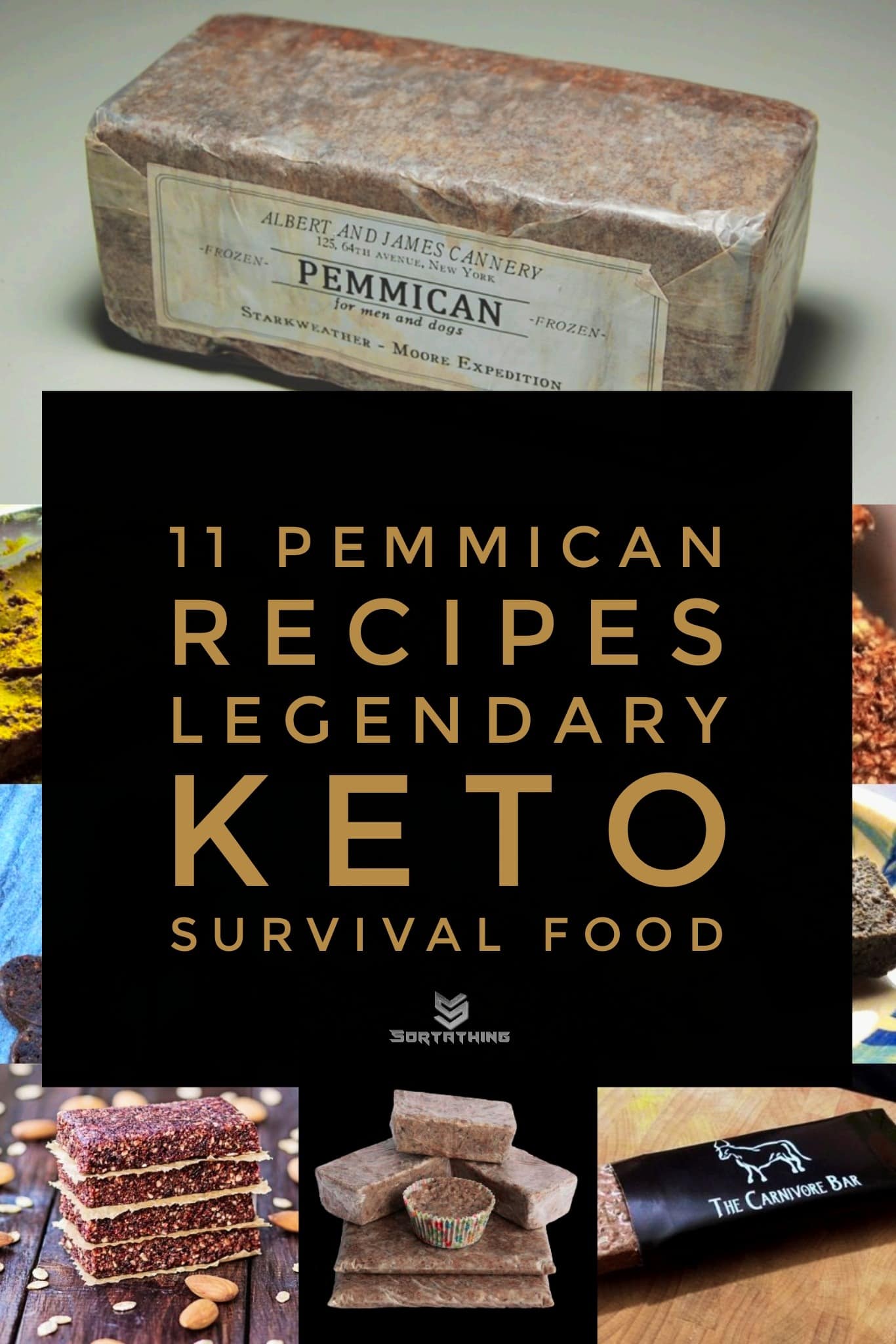 1. How to Make Pemmican

The seminal, step-by-step guide shows you how to make pemmican at home. When made correctly (using grass-fed lean red meat, dried at a temperature below 120 °F, and rendered fat from grass-fed animals), pemmican is a complete food.

No other nutrients or supplements are necessary to completely meet all human nutritional requirements. No other single food is as calorie dense or nutritionally complete. 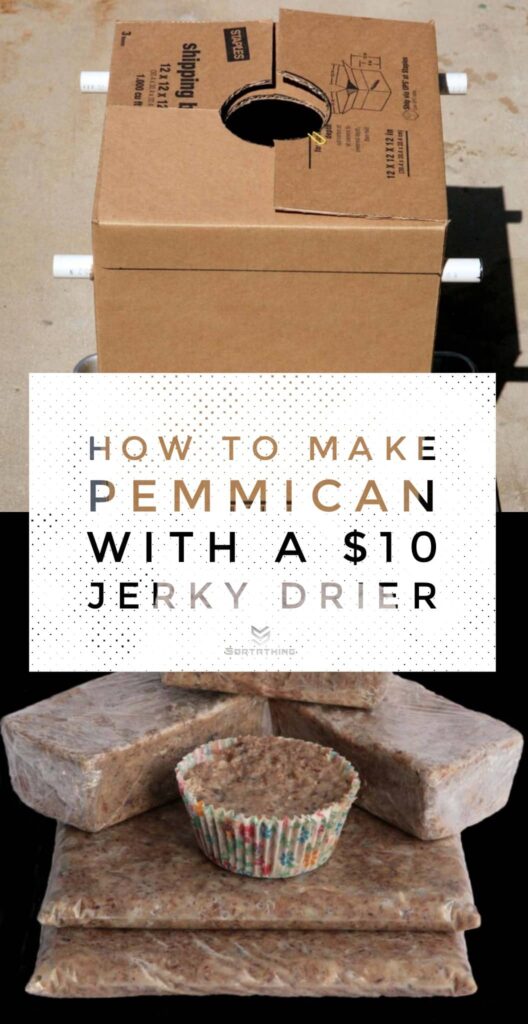 How to make pemmican with a $10 jerky drier

2. Pemmican Survival Superfood – How to Make the Ultimate MRE 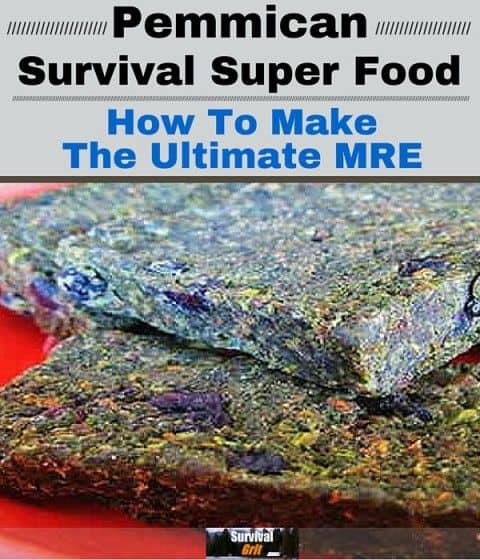 This pemmican recipe adds a little honey, nuts and berries to the meat mix. Some will find this makes it tastier than pemmican in its purest form. It will reduce its shelf life significantly, which can be decades if prepared with bone-dry meat and tallow.

Pemmican is the perfect standby nutrition for your bug-out bag as it’s the lightest, most nutritious food supply you can take with you.

This pemmican bar recipe scores high for flavor, cranberries and ginger in the mix too. The bars are the perfect companion for backpackers and hunters, and a satisfying snack for the family away from home. Traditional recipes use tallow but coconut oil can be used with great success. 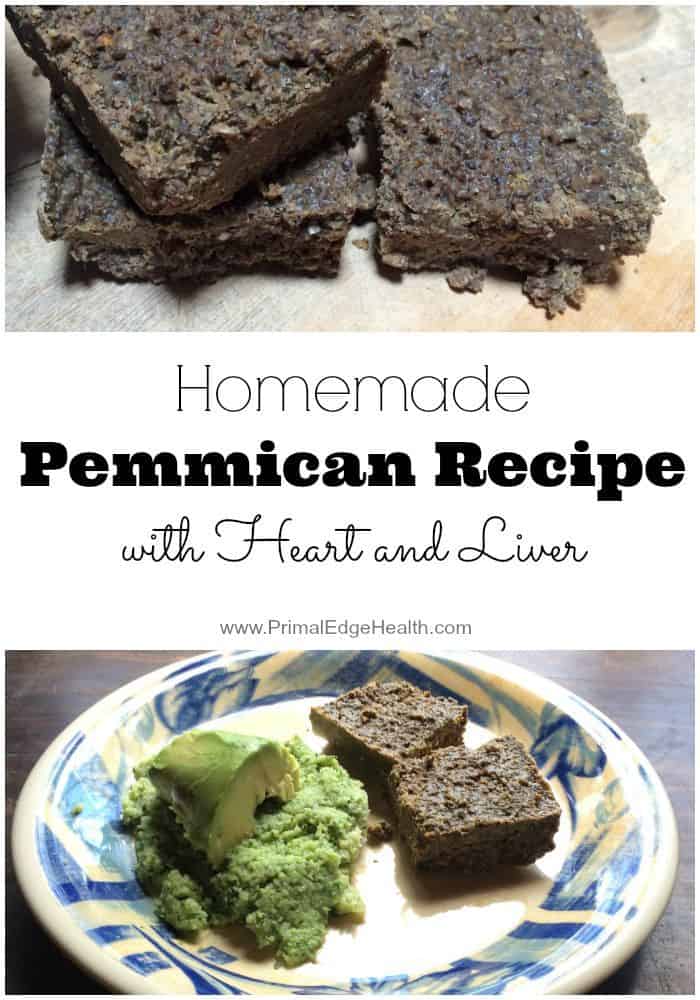 Pemmican recipes usually rely on lean cuts of meat, but heart and liver can be combined with fat too. This will boost the nutritional value even further. Fresh liver takes longer to dry than lean meat but it does eventually dry enough to grind into a fine powder. This pemmican recipe uses two parts of heart meat for each part of liver and muscle meat. 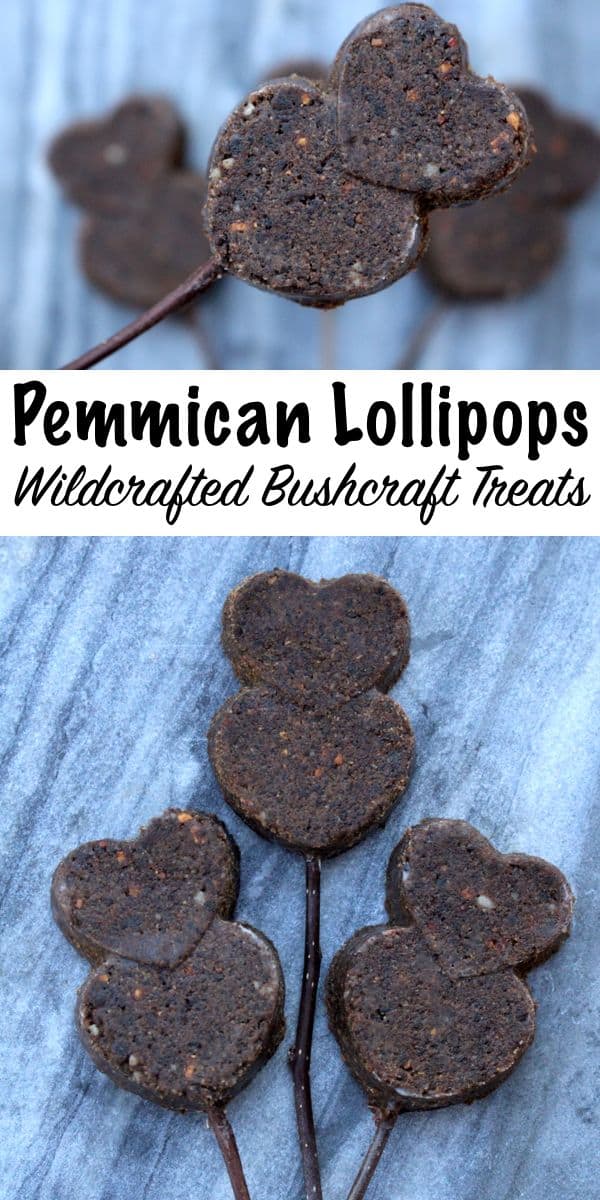 Fruity, meaty lollipops. Pemmican could be formed into just about any shape and here it’s presented as heart-shaped lollipops because this pemmican recipe uses heart and a little dried fruit in equal proportions with fat.

Twigs are used here as sustainable sticks, rather than store-bought. This the pemmican recipe that might appeal most to kids –  it’s a little sweeter and looks irresistible. 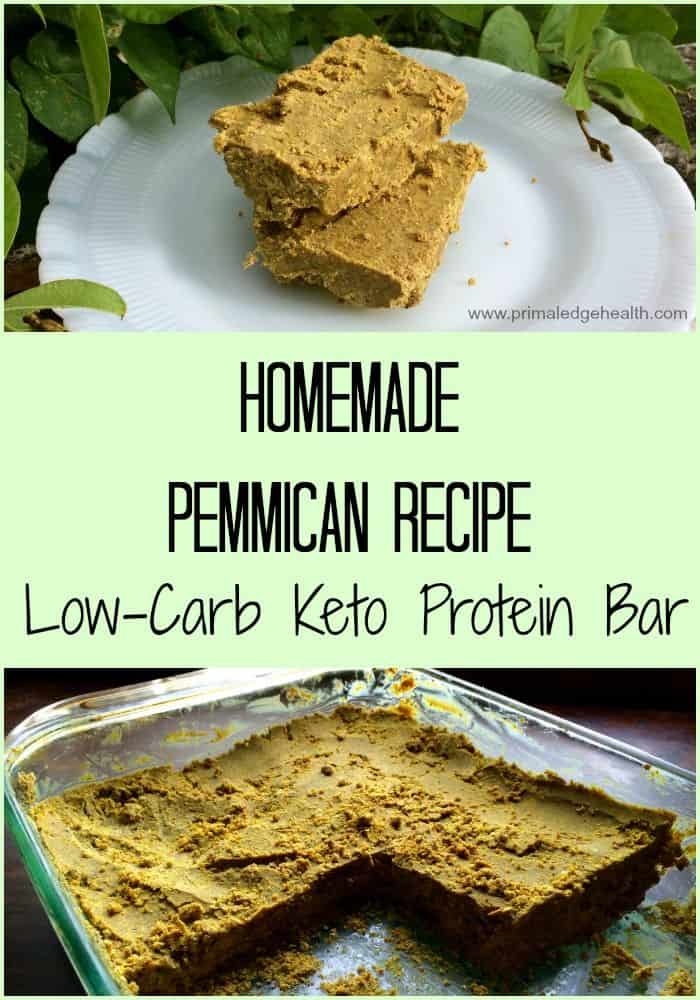 A good recipe for a lighter-looking pemmican bar to stow away in your pack when you’re out and about. Good tips on which herbs and spices to use in this recipe.

7. How to Make Pemmican – Step by Step Instructions 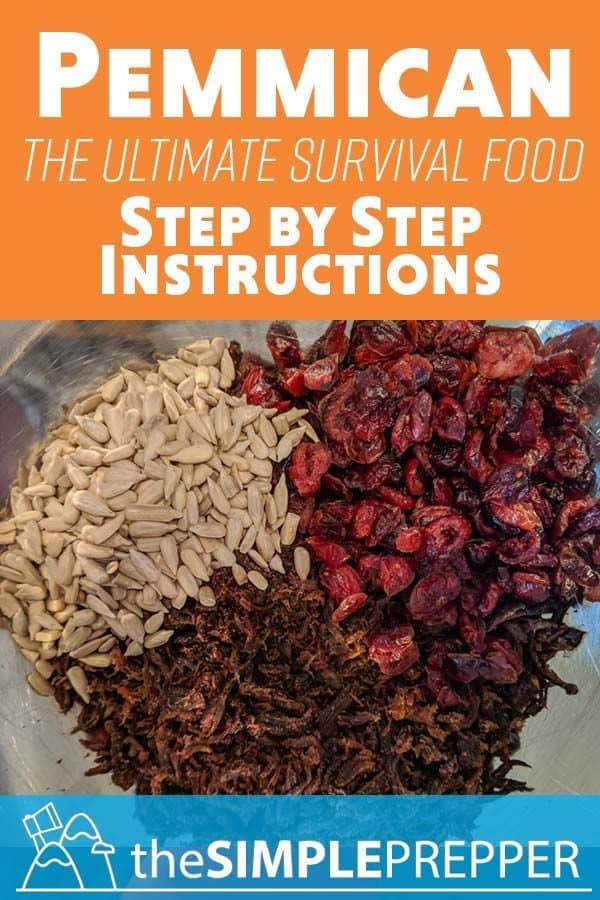 A great guide to making pemmican with added cranberries and sunflower seeds with beef top sirloin and pork fat. The Simple Prepper is a great site, very well presented and plenty of good ideas on a wide range of topics – I hadn’t heard of honey powder until today.

From: The Simple Prepper 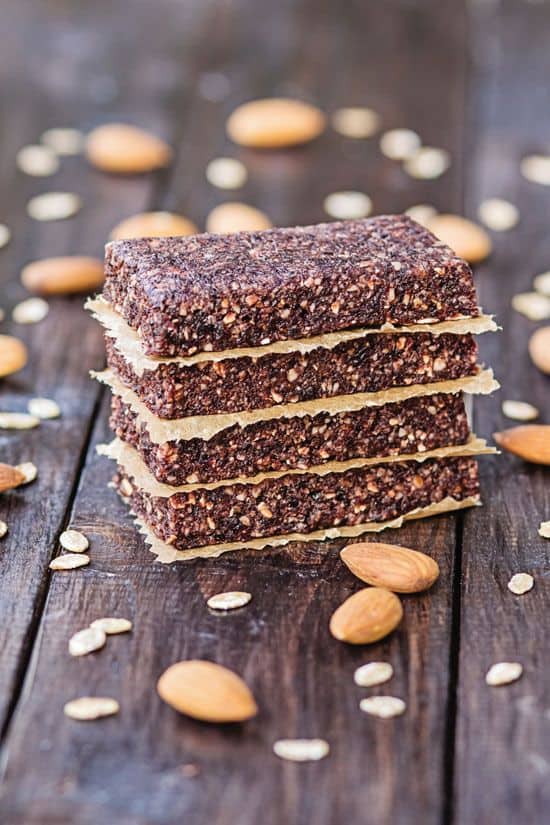 We think this pemmican recipe wins the award for best-looking. This recipe advises overnight drying in the oven at a fairly high temperature and then combines the ground meat powder with honey, nuts and dried fruit.

Allow for cooling then cut into 2 x 4-inch bars, individually wrapped for storage in your refrigerator.

OK, this is not even close to pemmican, it’s more of a fatty flapjack. It won’t store as long, but as these bars are really tasty, that might not be a problem as they’ll get eaten nearer the beginning of any expedition. 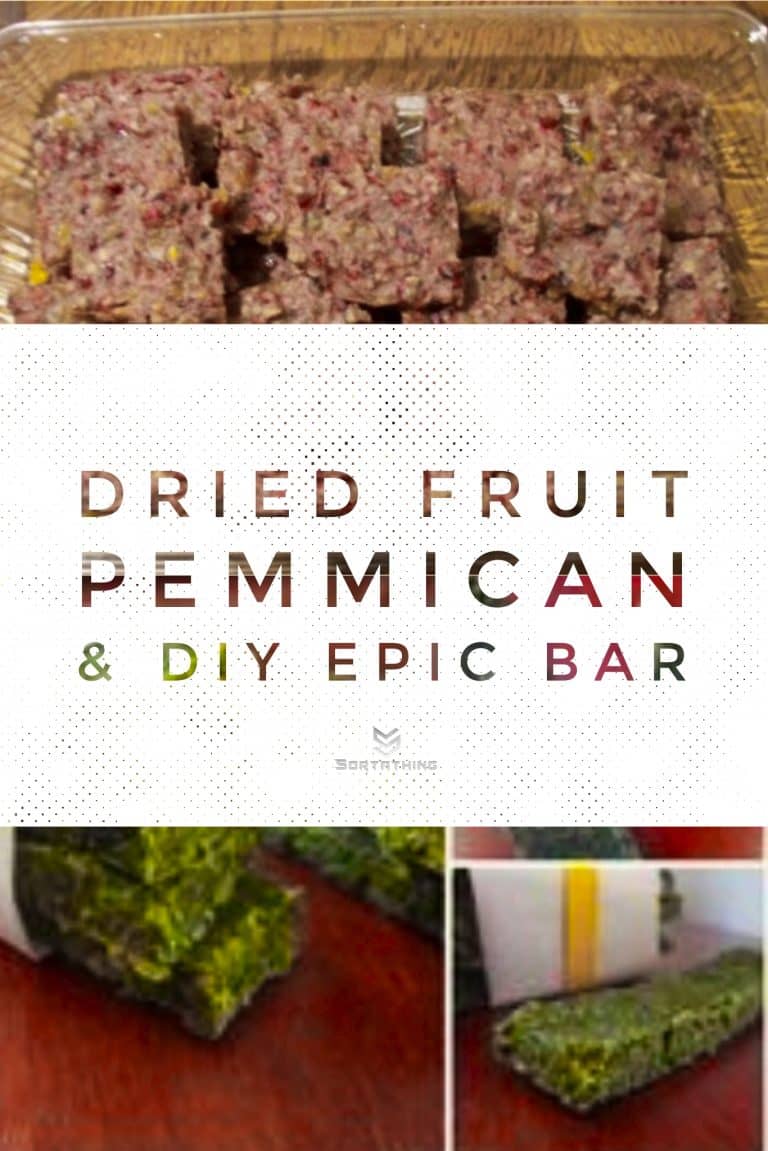 AIP-friendly protein bars based on pemmican, but with added greens, herbs and fruit. They’re based on Epic Bars, which I haven’t tried, but seem to get a lot of love. 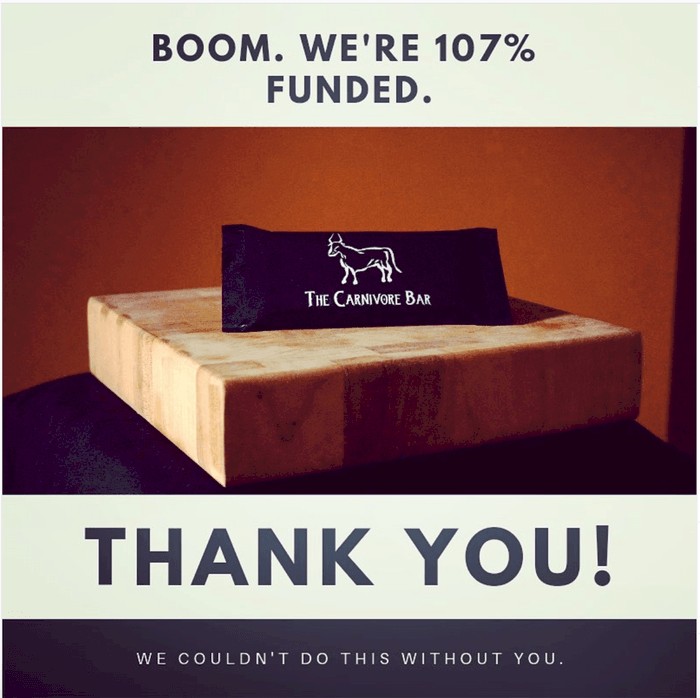 The Carnivore Bar – now fully-funded and available to pre-order

Not a recipe! An actual bar you can buy that is as close to pemmican as we’ve seen. The Carnivore Bar has now been successfully funded on Kickstarter and is due to start shipping later in 2019. They’re taking pre-orders now.

Sortathing is not an affiliate or anything for this product, just happy to spread the word.

And the end product? Well, “it tastes better than it looks”! 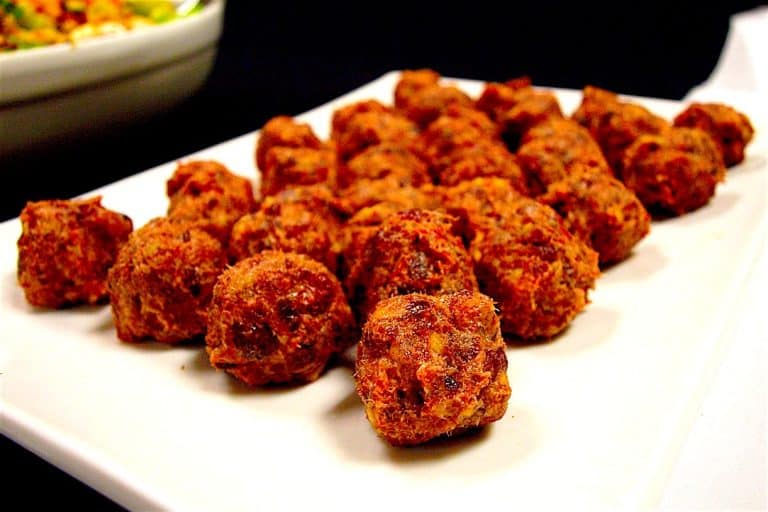 One of pemmican’s drawbacks is its taste. Most people find it plain or outright disgusting at first. It’s possible to improve the taste with added salt, dried fruit, sweeteners of various types but that can affect its shelf life.

But what about adding bacon? Everyone likes bacon, right? It could be the magic ingredient that makes pemmican palatable for more people.

This recipe uses equal amounts of bacon and lean meat, as well as cranberries and blueberries. We’re most impressed by this recipe and the next batch of pemmican we make will certainly be bacon based.

From: The Food Dictator

Does pemmican have a future?

Pemmican is by any measure a primitive food. In its simplest form it uses only two ingredients – dried lean meat and fat – and stone age techniques. But its status as the most nutrient rich food ever invented means it should have a bright future.

Ideologically, it’s unacceptable to many people. It’s in no way vegetarian or vegan. It’s rich in saturated fat. It’s an acquired taste. But it’s also non-perishable, a compact source of energy and could be manufactured on a large scale. This makes it a good candidate for the next stage of human exploration, out into the solar system and beyond.

If Elon Musk and NASA aren’t looking at the potential of pemmican now, they should do so before sending astronauts off on arduous missions.

Like these pemmican recipes? Check out our other Superfood Recipes as well as our popular Air Fryer Recipes

I have a freeze dryer that is supposed to keep food fresh up to 25 years when sealed in mylar with oxygen absorbers. Would pemmican with freeze dried berries be viable for long term storage?

I could not resist commenting. Exceptionally well written!

For years, people have touted the powers of superfoods. Thought to benefit your overall well-being, these foods have been linked to a sharper mind, clearer skin, a healthier immune system, and more. And while many dietitians have questioned superfoods, there is no arguing that some fruits, vegetables, and proteins offer more health benefits than others. Here's an article from Harvard Medical School about superfoods 10 superfoods to boost a healthy diet

Hi guys! the fellows at survivallife.com is giving away a free tactical flashlight