Skip to Content
Don’t eat junk food at a festival. Your mind and body will amply reward you. That’s what I found this year.

Going to a festival on a ketogenic diet is something you have to try. 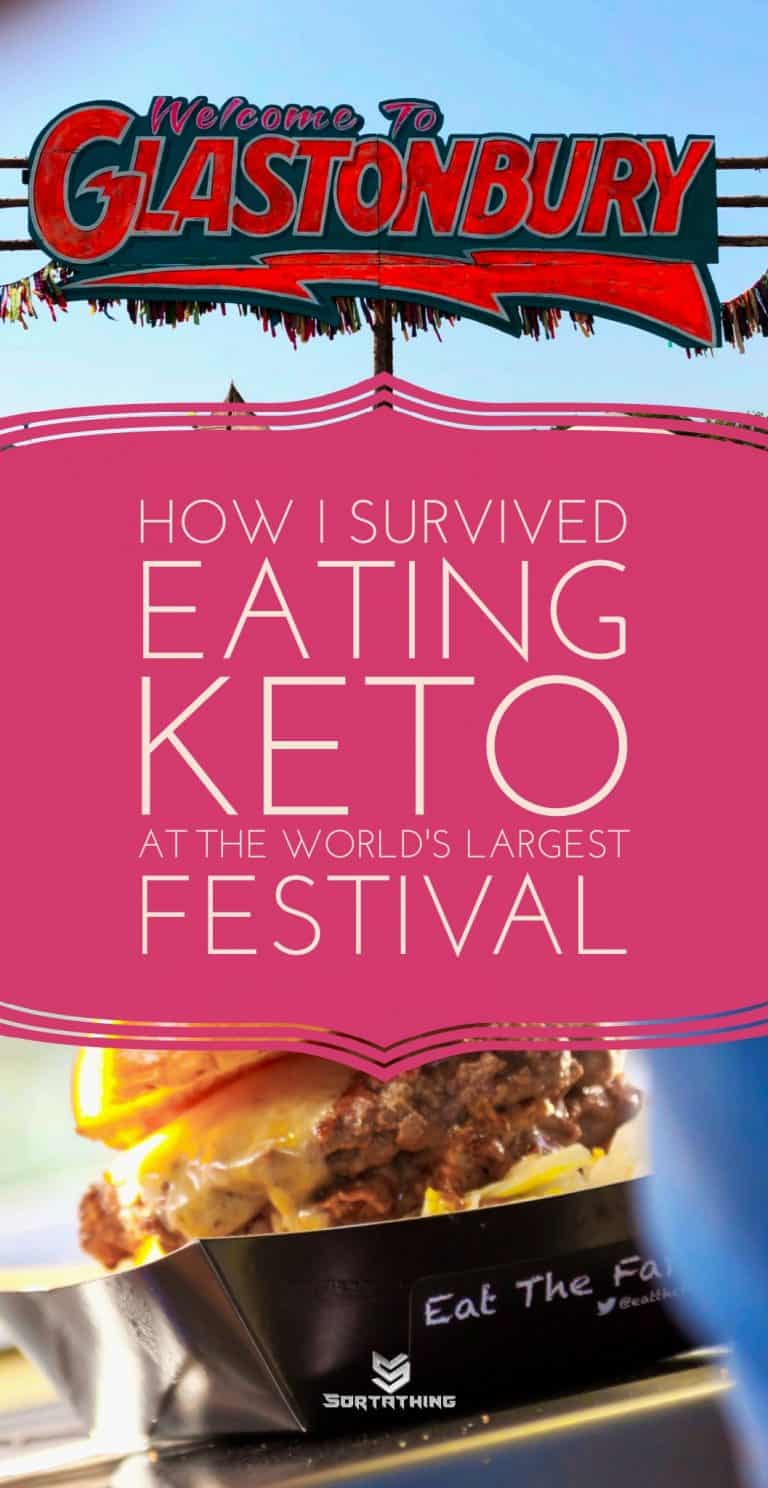 Last time around I was just starting out on a low-carb diet, finding my way and cheating here and there. Didn’t know then what I know now.

This time I arrived lean, fully fat-adapted and ready to go. The weather was warm from start to finish. There was none of the usual energy-sapping mud. This was going to be a good year, that was clear from the moment I arrived. But I did have a few concerns.

What would I find to eat?

What if the whole place has gone vegan this year because of Greta Thunberg?

Would I leave the Festival tired and good for nothing once again?

I had nothing to worry about. There was plenty to eat – though I was rarely hungry – and my keto superpowers reached their full strength. Here’s how it panned out.

What I took to my first keto Glastonbury Festival

By keto, I mean avoiding or strictly limiting my carbohydrate intake (especially sugar), taking care to avoid ultra-processed foods and inflammatory vegetable oils too. I was fuelled by my own body fat between meals, rather than having to top up with carbs to avoid hunger.

I was free to travel light. In years gone by, I’ve spent hundreds of pounds on food, water, alcohol, sun cream and the rest. All of it had to be carried in and out. I judged I could get away with taking these few items

I ate maybe half of one of those saucissons one morning, none of the chocolate (left it in the car), none of the wine, a couple of handfuls of the granola (The Paleo Foods Co Honey & Pecan Grain-Free Granola 340g

OK, the electric bike was a significant luxury.

How I ate keto at Glastonbury 2019

It’s easy to fall into the trap of organising your day around eating, and then eating the first junk you come across. That means spending a lot of money, waiting in lengthy queues and generally missing the point of being there – to enjoy all that’s on offer – music, atmosphere, people – rather than mindlessly consuming food, drugs and alcohol.

I found that I only ate when I wanted to – when something looked really appetizing – not when my body demanded it. I wasn’t being led around the site by my appetite any longer.

The variety of places to eat at Glastonbury is impressive. There are stalls and vans offering Vietnamese, Mexican, Thai, Filipino, French, Italian, Indian and many other world cuisines.

But I was committed to keeping my diet mainly carnivore, so I could comfortably rely on a couple of places. 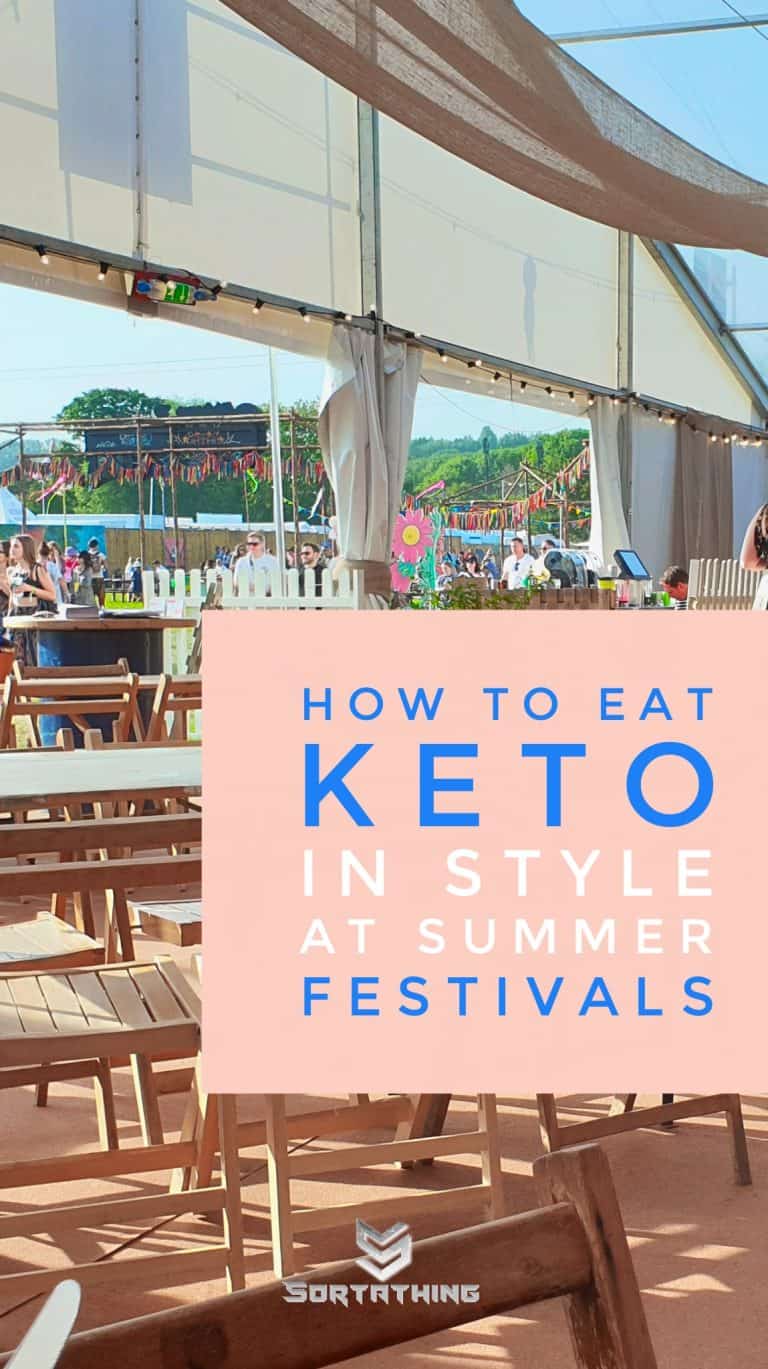 First of these was The Beach Tree, a large restaurant with proper table service that dominated the hospitality area. This is only accessible if you have a wristband and there are a couple of thousand people in there at any time. Its central location makes it the ideal base for striking out to all parts of the site in half the time it would take to go around it. 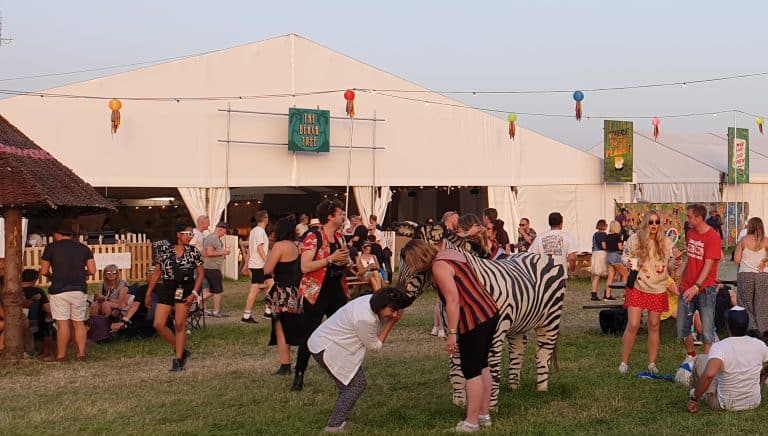 (There were areas within this interstage zone that remained out of bounds without a more exclusive wristband. Scores of Winnebagos and trailers were parked there, presumably occupied by headliners and their entourages. I’ve no idea what they ate or behaved in there. The phrase “gilded cage” is apt as all the fun is to be had outside. Best to think of hospitality as rest-stop and shortcut, not a destination.)

Anyway, that said, the Beach Tree was very good. The menu thoughtfully catered for carnivores by putting Steak & Eggs at the top of their breakfast menu, and it was very, very good. Hope it’s a regular fixture from now on. 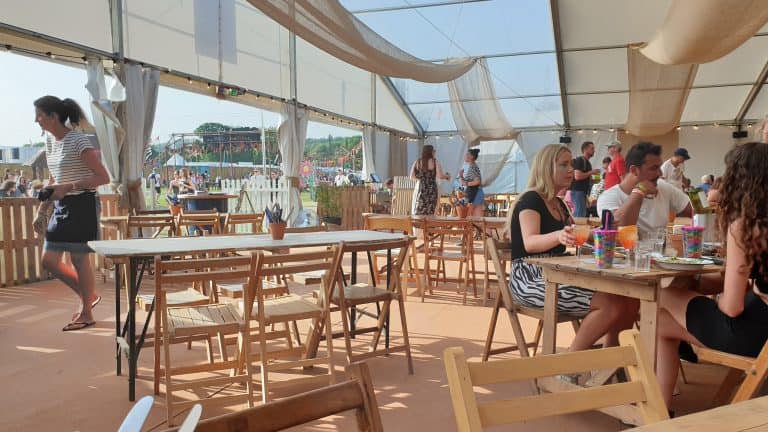 Inside the Beach Tree Restaurant at Glastonbury Festival 2019

Another place, well away from Hospitality but serving some of the best food on the entire site was Eat the farm. 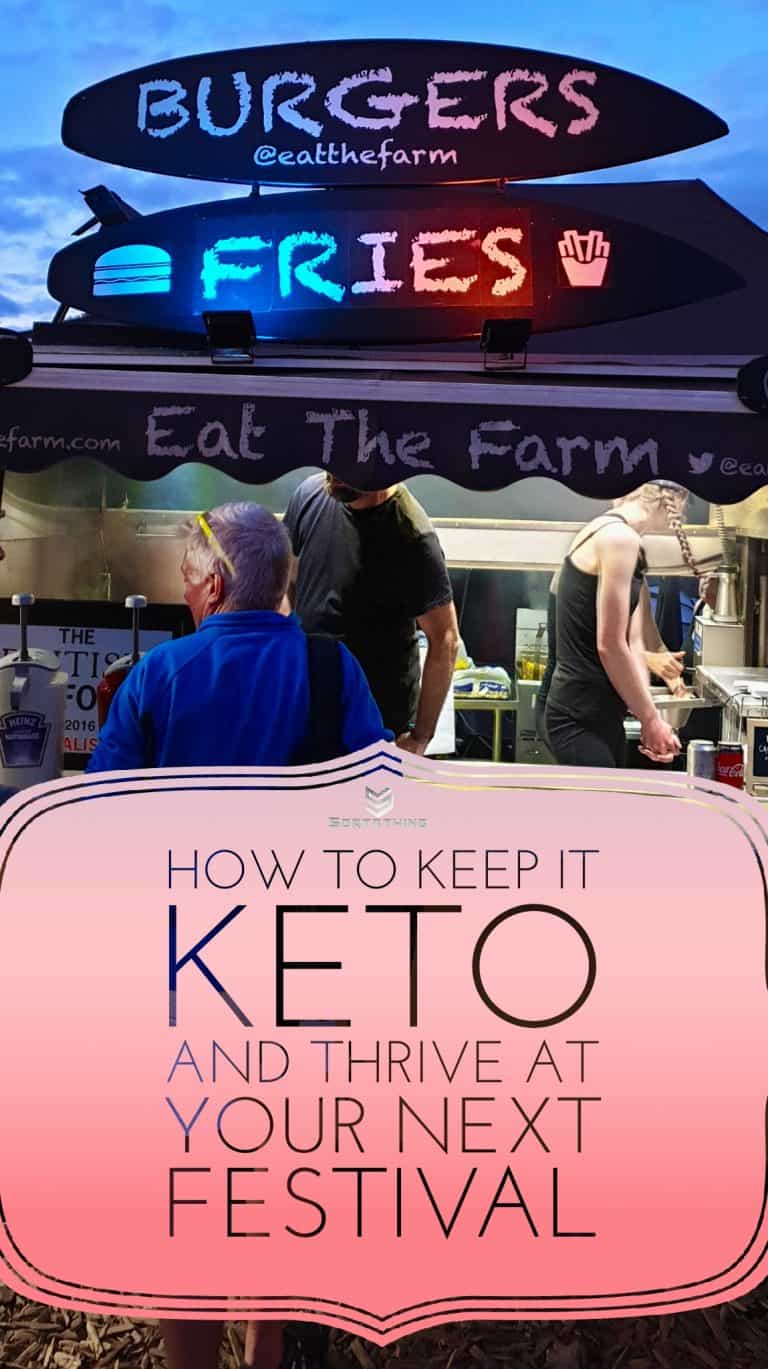 Their website says “We create our American-style burgers using quality fresh produce, all from Kent, sourcing our ingredients direct from farmers and producers.”

Update: Eat the Farm have contacted us to reveal that they sourced their meat for the Glastonbury Festival from Jon Thorner’s right next to the site!

I don’t know what magic goes into their burgers (which emerge as balls of meat before being flattened to sizzle on their hot plate) but they were, without any qualification, the best I’ve ever had.

They could only imprive, from a low-carb point of view, by offering an alternative like fathead dough in place of brioche buns.

So, with those two places, my Festival dining options were sorted.

How I fell off the keto wagon once or twice

I’m not a monk and it was a festival, so I let things slide a little now and then. That’s allowed, surely? Here’s what tempted off the low or zero carb path.

Chai tea – hot, milky, spicy tea. There’s some sugar in it, for sure, but it’s also rich in turmeric cloves, nutmeg and other spices with magical properties. The same place sold dark chocolate balls packed with guarana (basically caffeine) and I needed a boost (it worked). The place was lit up and looked so welcoming, couldn’t resist it. 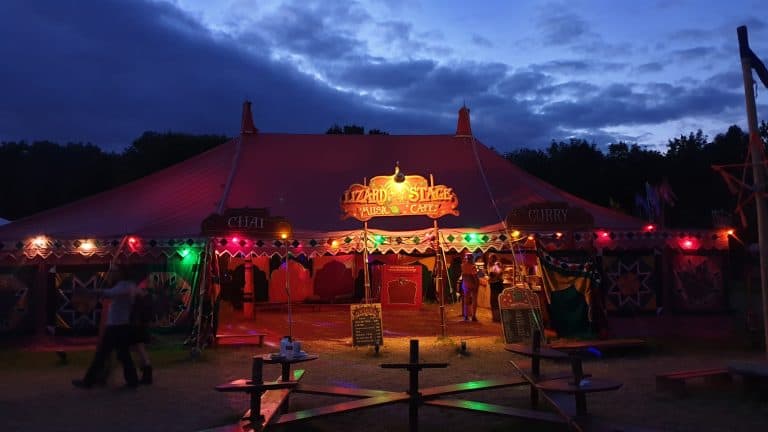 Lizard Stage Chai Tent Glastonbury 2019 – the scene of my downfall

An energy ball – about the size of a golf ball, made with dates, coconut flakes and who knows what else? I’ve made it a kind of a tradition to have one, but it was definitely a strike.

Espresso Martini  – this was a mistake. Much too sweet. Unpalatably sweet. Couldn’t finish it, didn’t feel good. But Maceo’s bar was great as a launchpad for the rest of the night, so there’s that. 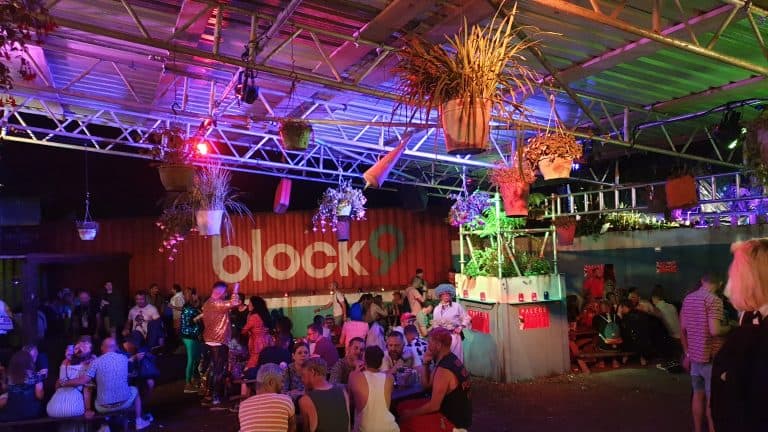 How did keto make me feel?

Festivals can be psychologically challenging. The vast crowds, high spirits and fear of missing out can get to you. It’s an intense experience if you’re not prepared or receptive. Introverts can end up feeling a battered by it all.

This year though, I just rode it out and enjoyed it. I never for one moment felt out of place or that the event wasn’t for me.

Quite the opposite, I felt at home, at ease and ready for anything – to talk, dance, explore. I was also relaxed about putting my feet up and watching the world go by.

Walking through lively crowds can be stressful, but I seemed to move through without any hesitation.

How much of this I can put down to diet is debatable, but there was a distinct lack of any anxiety throughout my three days there. I cannot say that about any other time I’ve been to the Glastonbury Festival. Everywhere was safe, everyone was benign, including me.

So, with this foundation of feeling good, I was less of an observer, more or a participant. An inner well of enthusiasm and energy kept me going until dawn on each of the three nights I spent there.

Cycling home through the nearly-deserted site was joyful and then I slept well, undisturbed by background music and festival chatter. My mind and body were uncomplaining despite being up all night dancing, walking, meeting people.

Any other physical improvements

No sunburn! I really tried, but the sun’s powerful rays could not penetrate my tough keto carapace.

While others huddled together beneath any shade they could find, I strutted around sleeveless and hatless. The worst sunburn I ever had was inflicted at this Festival some years ago. Didn’t even go slightly pink this year. There seems to be something to the vegetable-oils-promote-sunburn theory.

My overall physical stamina this year, my first fully fat-adapted, was incredible. As a much younger fella, I found myself flagging by the end of the second day. This year, that was when I felt I was hitting my stride.

OK, having an electric bike at my disposal avoided the need for miles and miles of walking, but I found I could just carry on dancing, exploring, without a break. I squeezed every last drop of fun out of this mutha.

Teeth – eating doughnuts, fries & ketchup, brownies all the time can leave your teeth feeling grimy and unloved. Skanky is the word. Didn’t find that at all this year.

Hangovers – despite those Espresso Martinis my mornings were a time of quiet contemplation of the day ahead. In the past, mornings were all about quietly dying with a pounding head and shrivelled eyes. That was a nice development. #meatheals

What if more of us ate keto at festivals?

One problem all festivals face is the volume of trash generated by hundreds of thousands of people. The Glastonbury Festival organisers go all out to reduce this each year (single-use plastic bottles and sauce sachets were banned in 2019) but there’s still a mountain of food wrappers to deal with.

If people feel the need to eat more nutritious food but less often, the waste problem will diminish.

It is exciting to have food from around the world to enjoy it all has to get here somehow. Comparing the food miles of locally-raised beef with rice and exotic vegetables flown in from the other side of the world, it’s no contest.

That’s the environmental impact, but there’s also the metabolic impact of eating more efficiently. And the psychological. I can see only benefits and many more I haven’t covered here.

If you’re minded to do it, I can wholeheartedly recommend going to a festival keto. But bear these things in mind:

There’s a whole Summer of Festivals ahead of us now. Glastonbury happens to be the largest and longest-running, as well as the one I am most familiar with.

What I find encouraging is how, in my mid-forties, I’m enjoying festivals more than I did even in my twenties. A simple but effective change in diet is the reason, and that’s something my younger self would never have foreseen.

Driving home from the Glastonbury Festival in the past I’ve sometimes beat myself up over all the things I hadn’t done, the bands I’d missed, the experiences I should have had.

This year? Not one bit. I stayed until it was over, I was ready to leave and did so without a single regret or unresolved FOMO. The only difference to previous years was how I chose to sustain myself while I was there. Quality in, quality out beats garbage in, garbage out every time.

This web site is my breathing in, very great layout and perfect content material .napewno

We are also noticing that traditional medical doctors are also recognizing the increased interest in holistic healing and are finally starting to incorporate these healing methods into their practice to keep up with the current trends. There are many ways to obtain a construction job interview, but some are more effective than others.Arletha Alldredge

I loved as much as you’ll receive carried out right here. The sketch is tasteful, your authored subject matter stylish. nonetheless, you command get got an edginess over that you wish be delivering the following. unwell unquestionably come more formerly again as exactly the same nearly very often inside case you shield this hike.How Google Search engine works

I was suggested this website by my cousin. I am not sure whether this post is written by him as nobody else know such detailed about my trouble. You are wonderful! Thanks!Nice blog here! Also your web site loads up fast! What web host are you using? Can I get your affiliate link to your host? I wish my website loaded up as quickly as yours lolLife After Coronavirus