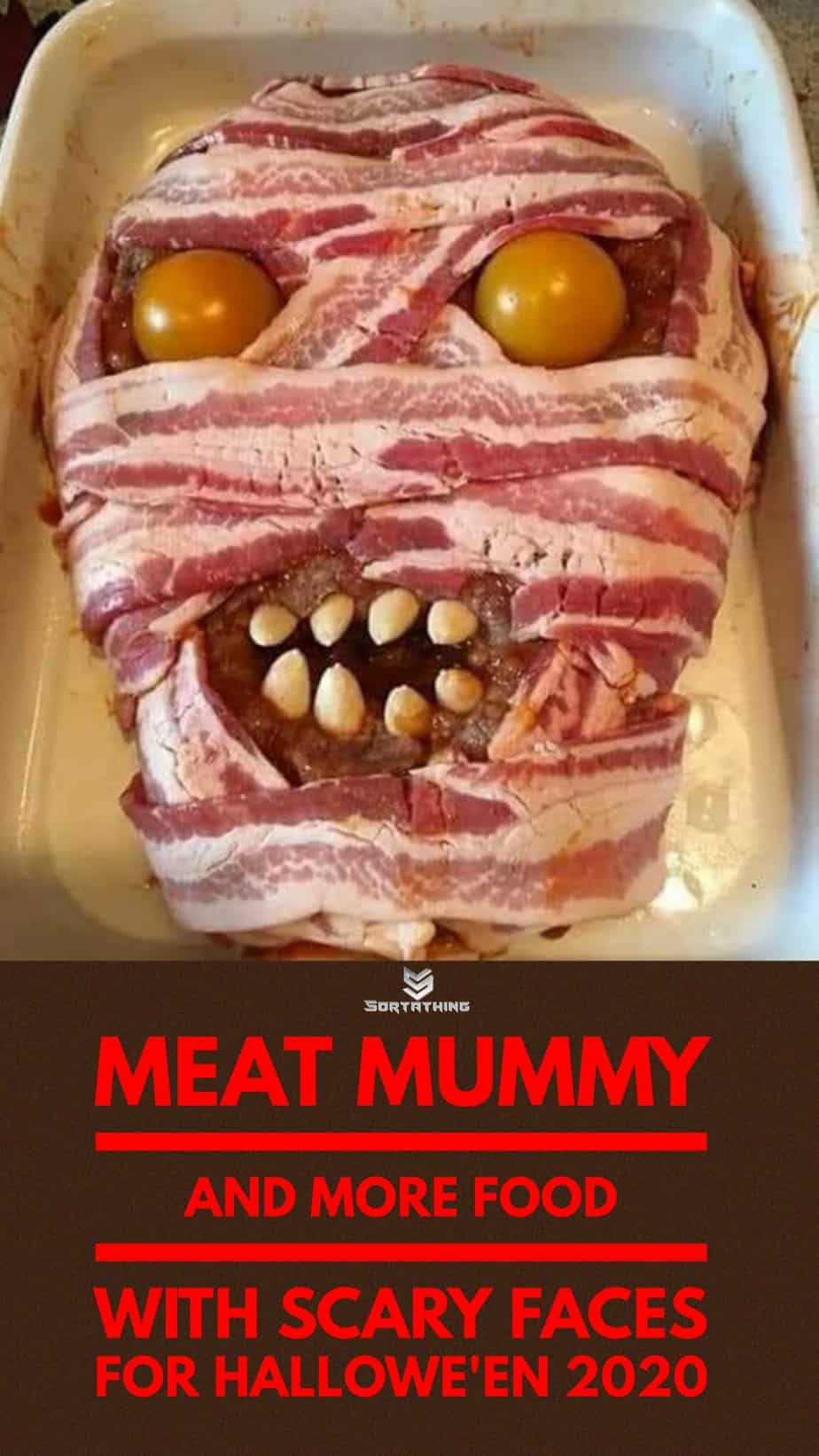 A new entry for 2020! This heart-stopping bacon-wrapped mummy with almond fangs, cherry tomato eyes and a spicy ground beef meatloaf filling was recently unearthed from an oven and served to half a dozen famished archaeologists. The recipe is a close-kept secret from 4,000 years ago, but don’t let that stop you recreating. Just beware of the mummy’s curse which, legend has it, will be unlocked by undercooking and failing to follow basic food hygiene protocols. You have been warned.

Food with faces: The science

Anyway, seeing faces in things. There’s a scientific name for that.

Pareidolia: The science behind seeing faces in everyday objects. Pareidolia is a psychological phenomenon that causes people to see patterns in a random stimulus.

Not so random if you stick a pair of googly eyes on a muffin. In fact, any food with googly eyes makes me chuckle.

Sometimes, food gazing back at you can be a little disconcerting. But mostly it’s really funny, especially for kids.

Here’s my selection of 14 irresistibly funny food with faces treats that are both eye-catching and delicious. Perfect party desserts for the holidays. 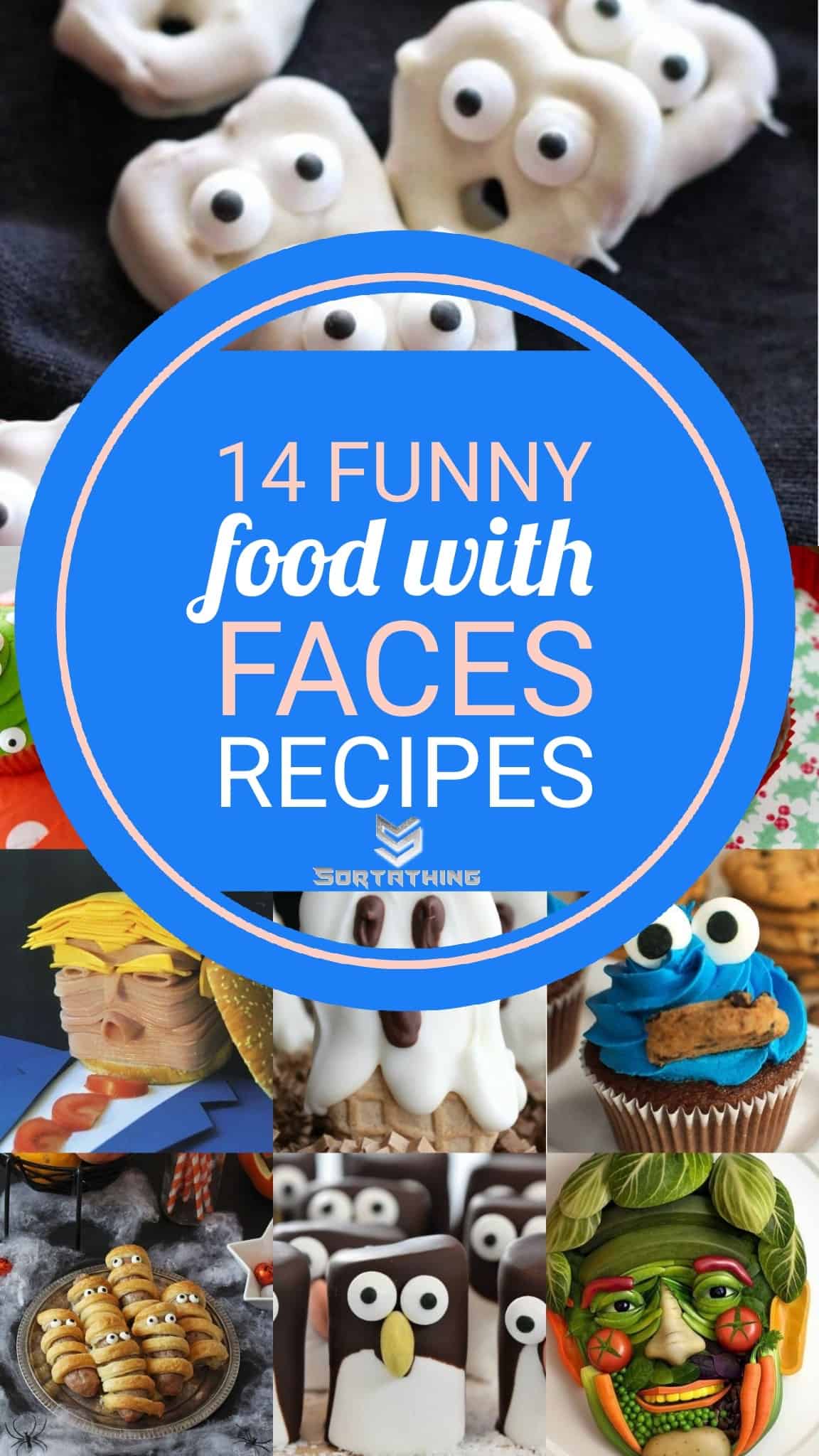 Try these adorable Polar Bear Cookies. You don’t have to make many of these to liven up your cookie tray for the holidays.

From: Noshing with the Nolands 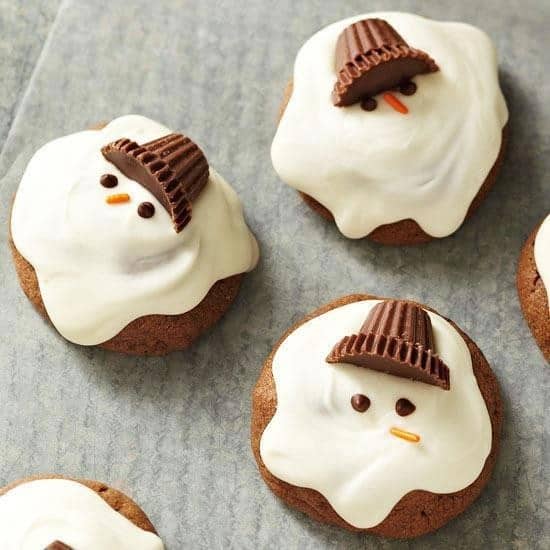 These cute Christmas cookies are easy to make, you won’t even need a rolling pin. The gloopy-looking frosting is simply melted vanilla-flavored candy coating.

These cute Christmas reindeer cupcakes are ridiculously easy to make. Your kids will love helping you out  by decorating chocolate cupcakes with M&Ms, pretzels, and candy eyes. 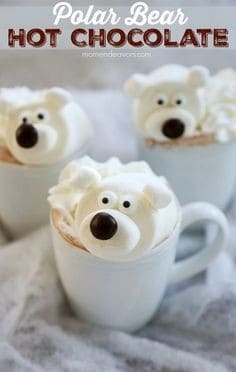 Hot chocolate with marshmallows is a perennial favorite as the season cools. You can make your hot chocolate eveb more fun this winter by making these polar bear marshmallows to complete your drink!  So cute and sure to be a hit with the kids!

These perfect no-bake Christmas treats  only require three ingredients. They’re perfect for a Christmas party or giftwrapped for friends as family as a holiday gift. 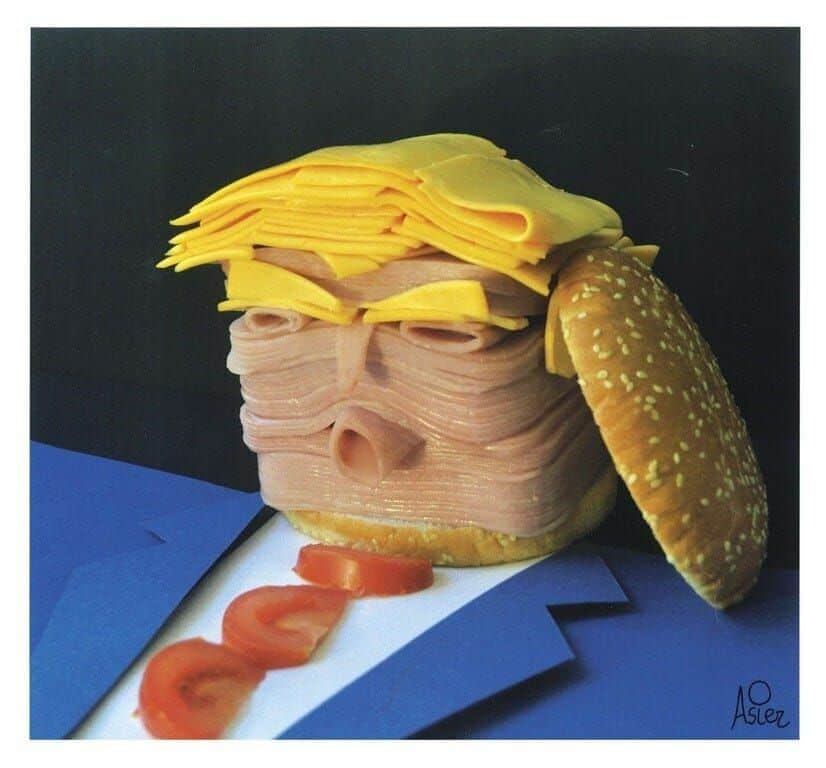 OK, OK, maybe POTUS rendered in ham and cheese is unlikely to appear on many tables this Season. But, if nothing else, it shows that there’s no end to the creativity of people playing with their food. What other national figures do you think could be recreated with leftovers? 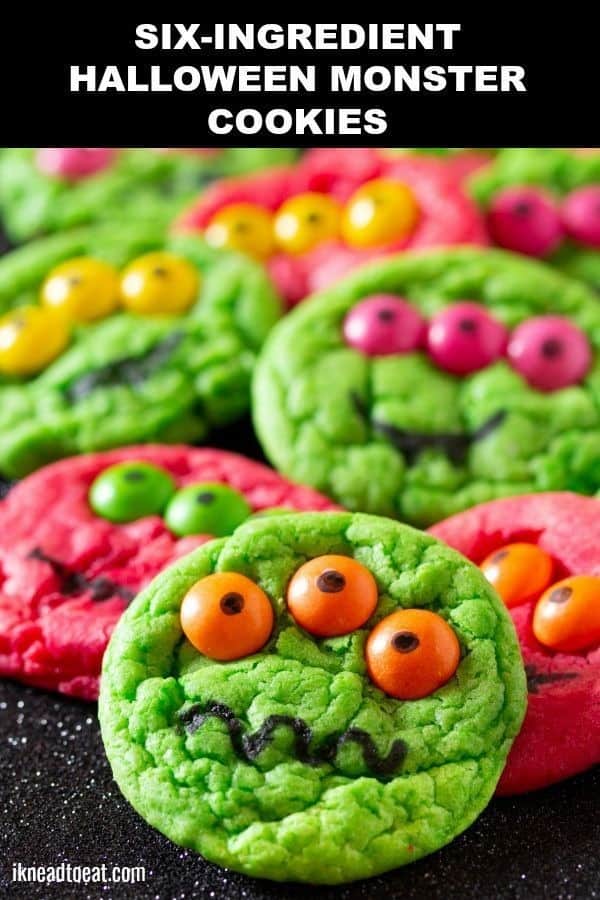 A super easy, colorful recipe, make them as monstrous as you dare!

From: I Knead to Eat

You’ll definitely want to use the thin Oreos to create these spooky yet fun bat creatures. Standard Oreos are a little too thick and heavy to use.

The perfect cupcakes for a Cookie Monster party because they’re so easy to put together.

This Halloween, your cupcakes will look right back at you! 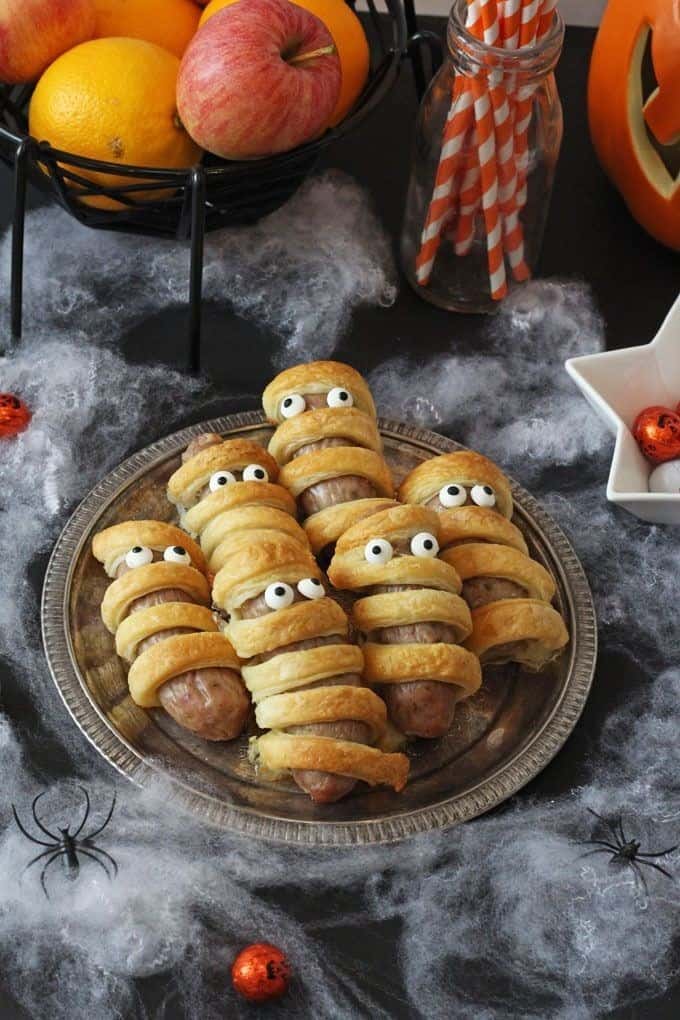 A really fun addition to a kids Halloween or Egyptian-themed party. Yes, they are a thing… in Egypt. You just need some suitable sausages, pastry and, of course, a pack of edible eyes!

From: My Fussy Eater

From: Home Made Interest

Such a cute Christmas fun food idea here – super-easy marshmallow penguins with a lot of character! 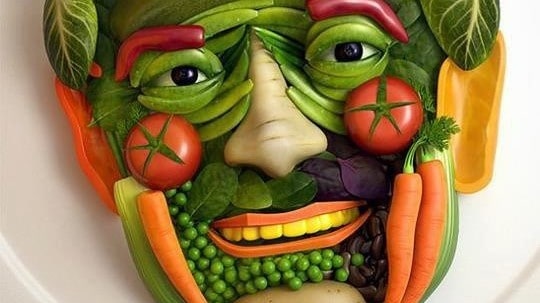 Incredible. Painstaking. A modern day take on Arcimboldo’s famous fruit and vegetable paintings? In case you ever wondered this piece demonstrates just what can be done with a carefully-arranged selection of carrots.

Check out our other food posts

Hi there! I want to share with you a very important message going around the internet.

Would you allow your government to place a microchip in your body?

Did you know that is the future we are approaching with RFID Microchip technology?

Even more news worthy, did you hear there was somone almost 2000 years ago who foretold of a cashless society in the end times? This mans name is Jesus.

Did you know that this RFID chip aligns perfectly with the Mark of the Beast in Revelation 13:16-18?

"He(the false prophet) causes all, both small and great, rich and poor, free and slave, to receive a mark on their right hand or on their foreheads, and that no one may buy or sell except one who has the mark or the name of the beast, or the number of his name.

Here is wisdom. Let him who has understanding calculate the number of the beast, for it is the number of a man: His number is 666" (Revelation 13:16-18).

Referring to the last days, this could only be speaking of a cashless money society, which we have yet to see, but are heading towards. Otherwise we could still buy or sell without the mark among others if physical money was still currency. This mark could not be spiritual, because the word references two different physical locations on the body. If it was spiritual, it would just say in the forehead.

Carl Sanders sat in seventeen New World Order meetings with heads of state officials such as Henry Kissinger and Bob Gates of the C.I.A. to discuss plans on how to bring about this one-world system. The US government commissioned Carl Sanders to design a microchip for identifying and controlling the peoples of the world-a microchip that could be inserted under the skin with a hypodermic needle(a fast, convenient method that would be gradually accepted by society).

Carl Sanders, along with a team of engineers behind him, with US grant monies supplied by US tax dollars, took on this challenge and designed a microchip that is powered by a lithium battery, rechargeable through the temperature changes in our skin. Without the knowledge of the Bible(Carl Sanders was not a follower of Christ at the time), these engineers spent one and a half million dollars doing research on the best and most convenient place to have the microchip placed under the skin.

Guess what? These researchers found that the forehead and the back of the hand(the two places Revelation says the mark will go) are not just the most convenient locations, but are also the only viable places for rapid, consistent temperature fluctuations in the skin to recharge the lithium battery. The RFID chip is about seven millimeters in length, .75 millimeters in diameter, about the size of a grain of rice. It is capable of storing pages upon pages of information about you. All your general history, work history, crime record, health history, and financial data can be stored on this microchip.

Carl Sanders believes that this microchip, which he regretfully helped engineer, is the "mark" spoken about in Revelation 13:16-18. The original Greek word for "mark" is "charagma," which means a "scratch or etching." It is also interesting to note that the number 666 is actually a word in the original Greek language. The word is "chi xi stigma," with the last part, "stigma," also meaning "to stick or prick. Carl believes this is referring to the use of a hypodermic needle being poked into the human flesh to insert the microchip."

Carl Sanders asked a doctor what would happen if the lithium contained within the RFID chip leaked into the body. The doctor answered by saying a terrible sore would appear in that spot. This is what the book of Revelation says:

"And the first(Angel) went, and poured out his vial on the earth; and there fell a noisome and grievous sore on the men which had the mark of the beast, and on them which worshipped his image" (Revelation 16:2).

In this world we are identified by numbers, whether it is our social security number, drivers license, or cards used to make payments. The number of the beast represents something like this, to identify us in a one world government system. This number will be contained inside the RFID microchip to identify us so we may buy or sell.

To see the hidden meaning behind calculating the number 666(6+6+6=18), and how it lines up with scipture perfectly,

The Bible warns us in the last days that a false prophet will rise up doing miracles to deceive many to receive this mark. Whatever it takes, do not take it!

"Then a third angel followed them, saying with a loud voice, "If anyone worships the beast and his image, and receives his mark on his forehead or on his hand, he himself shall also drink of the wine of the wrath of God, which is poured out full strength into the cup of His indignation. He shall be tormented with fire and brimstone in the presence of the holy angels and in the presence of the Lamb. And the smoke of their torment ascends forever and ever; and they have no rest day or night, who worship the beast and his image, and whoever receives the mark of his name" (Revelation 14:9-11).

Out of all the world religions, how can we be confident the Bible got it right? The scientific data has established and continues to support that the universe once had a beginning in which space, time and matter were created. This is known as the big bang.

"The non-biblical religions tell us that god or god's create within space and time that eternally exist. The Bible stands alone and says that time and space don't exist until God creates the universe." - Hugh Ross

Did you hear that the real Noah's Ark was discovered where the Bible told us it would be with the correct dimensions? As well as hard evidence for the destruction of Sodom Gomorrah and the Exodus account of the Red Sea crossing?

The Bible is the most translated and read book in the history of the world, full of predictive prophecies. Wouldn't you expect God's word to be so?

This information can all be found at https://biblefreedom.com

"And He(Jesus) said to me(Apostle John), "It is done! I am the Alpha and the Omega, the Beginning and the End. I will give of the fountain of the water of life freely to him who thirsts" (Revelation 21:6).

All religion is man-made. Man can create religion, but no one can create the Holy Spirit that comes from God out of Heaven. Jesus never told us to follow a religion or denomination:

"Then He(Jesus) said to them all, "If anyone desires to come after Me, let him deny himself, and take up his cross daily, and follow Me" (Luke 9:23).

You can receive the Spirit of God right now. If you are willing to humble yourself before the Lord, and believe in your heart that God raised Him from the dead on the third day; call out to God and ask Him to forgive your sins, to receive His Holy Spirit. If you are genuine, He is faithful and just to forgive, and He will give you a new heart, a renewing of the mind, restoring everything the devil has stolen from you; making you like a child again.

When we receive the Spirit of God, we become born from above, and His seed resides within us. We no longer make a practice of sin, but rather turn away from unrighteousness and receive the righteousness of Christ.

From that point onward, we must put all our hope and trust in Jesus, and grow to walk in His ways, not straying from the narrow path. For Jesus says,