Electric bikes have been around for decades, but these days they’re being challenged by e-scooters. They’re smaller, lighter… possibly even cooler than e-bikes. But does that all add up to being something you’ll want to ride every day, and everywhere?

What’s driving the recent popularity of e-scooters? And, given the choice, should you go for an e-bike or an e-scooter?

In this article, we look at how electric bikes vs electric scooters: which personal mobility solution is really better? 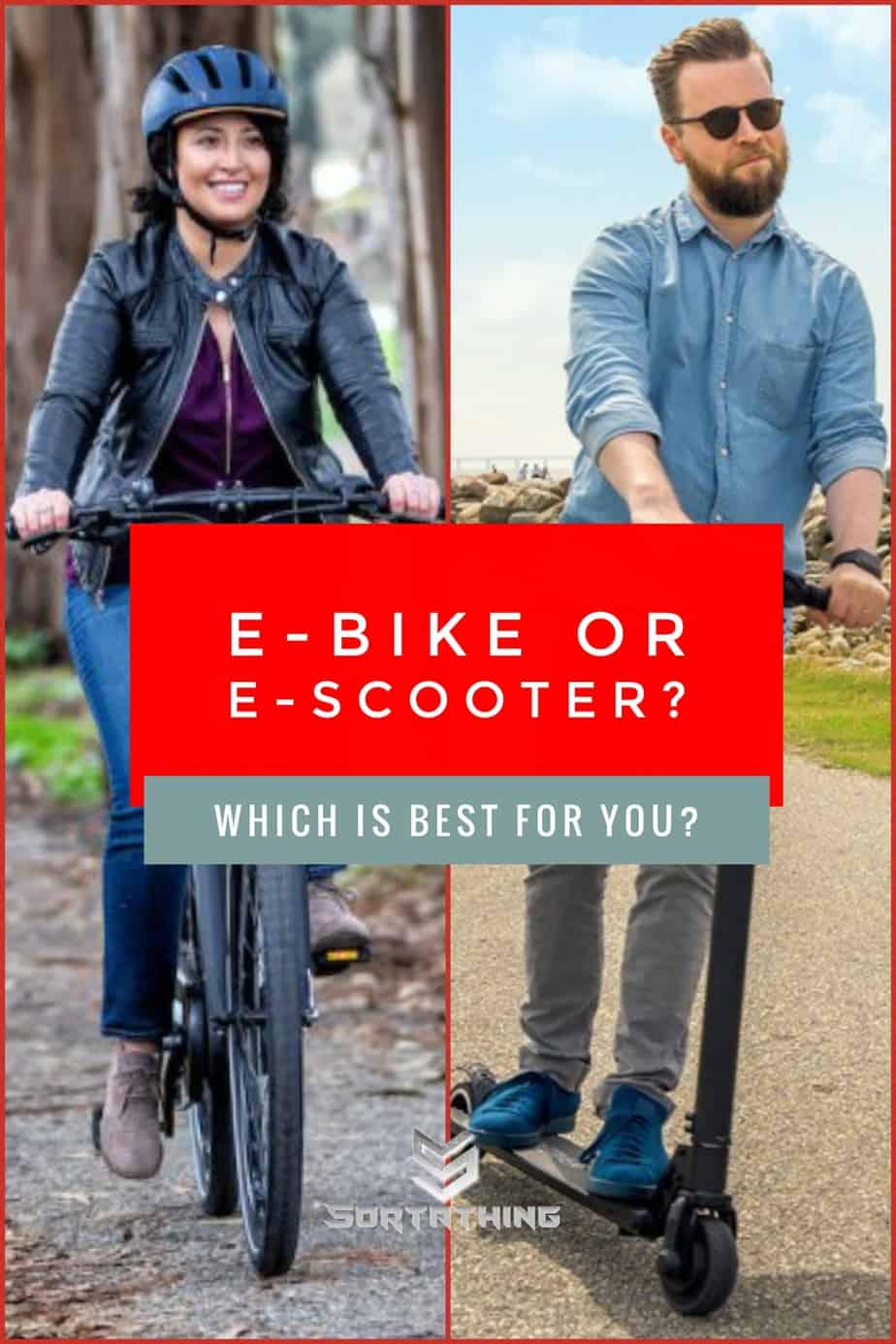 Electric bikes and electric scooters both have pros and cons, but which is best for your purpose?

+ Better over long distances
You can expect at least 20 miles and up to 100 miles between battery charges with the most capable electric bikes. Dual-battery set ups have become common in recent years – Bosch have made great progress – and there are single batteries that offer twice the battery capacity e-bikes use to rely on.

Of course, if you’re only riding a few miles between charges, this is not a problem, but for those planning tours and days in the saddle, range is a big factor and e-bikes win by some distance.

+ Better on rough terrain
Some electric bikes are better than others in this respect. A lightweight folding e-bike with small wheels will be uncomfortable on anything but well-laid tarmac.

But it’s also possible to find electric mountain bikes that can go just about anywhere the rider dares. With their tiny wheels, limited handling and minimal suspension, scooters cannot compete.

+ Better for carrying stuff
Most electric bikes can easily be loaded up with panniers, baskets and even trailers. A well-equipped e-bike can become a true replacement for a car and carry a week’s groceries or camping equipment, yet still be easy to ride a great distance.

+ The exercise factor
Want to enjoy exercise while sitting down and enjoying the sights and sounds as you ride along? An electric bike is definitely for you.

Research has shown that not only do electric cyclists get a useful workout, they’re also like to ride more often and further than regular cyclists. They also give you the confidence to tackle hills and headwinds that might defeat you with pedal power alone.

+ Safer in traffic
Electric bikes have road presence. Other road users are wary of bike riders (or should be) and cyclists can load up a bike with lights and reflectors. Cyclists, with a little bit of care, are visible and avoidable. A guy on a scooter is just another pedestrian – this makes a difference out there on the road.

Electric bikes have evolved over the years to become lighter, stronger and more robust, with all the safety features you’ll need out on the streets: lights, brakes, reliable tyres, plenty of metalwork to take bumps and scrapes.

+ Electric bikes are faster
Electric bikes propel the rider up to a top speed of between 15mph and 30mph, depending on their class. E-scooters tend to top out nearer 12-15mph (with exceptions). They cover greater distances, more quickly, which makes them great for longer tours and recreational riding, as well as the short journeys scooters excel at.

–  Electric bikes can expensive
A good electric bike bought new could cost upwards of $2000. It should come with a 2-year warranty covering parts and sometimes labor, but it is a big investment.

One way to limit costs is to buy a used or ex-display electric bike.

–  Electric bikes are heavier than scooters
Electric bikes weigh in around 40-50 pounds, around twice the weight of an e-scooter. They are a two-hand carry for most people, but a scooter can be easily manipulated with one hand.

–  Electric bikes take up more space
Unless you go for a folding electric bike, an electric bike will take up at least as much room as a regular pedal cycle. If storage space is limited in your home or at work, you’ll probably have to leave it locked outside, in the elements and at the mercy of criminals.

–  Not everyone can ride a bike!
About 6% of people in the US do not know how to ride a bicycle. Many more have not ridden a bicycle for many, many years.

Pretty much anyone who can stand and walk can ride a scooter, they are easier to balance with little practice. That’s why kids ride scooters long before they ride a bike. It’s easy. This alone means electric scooters have wider appeal for casual users. 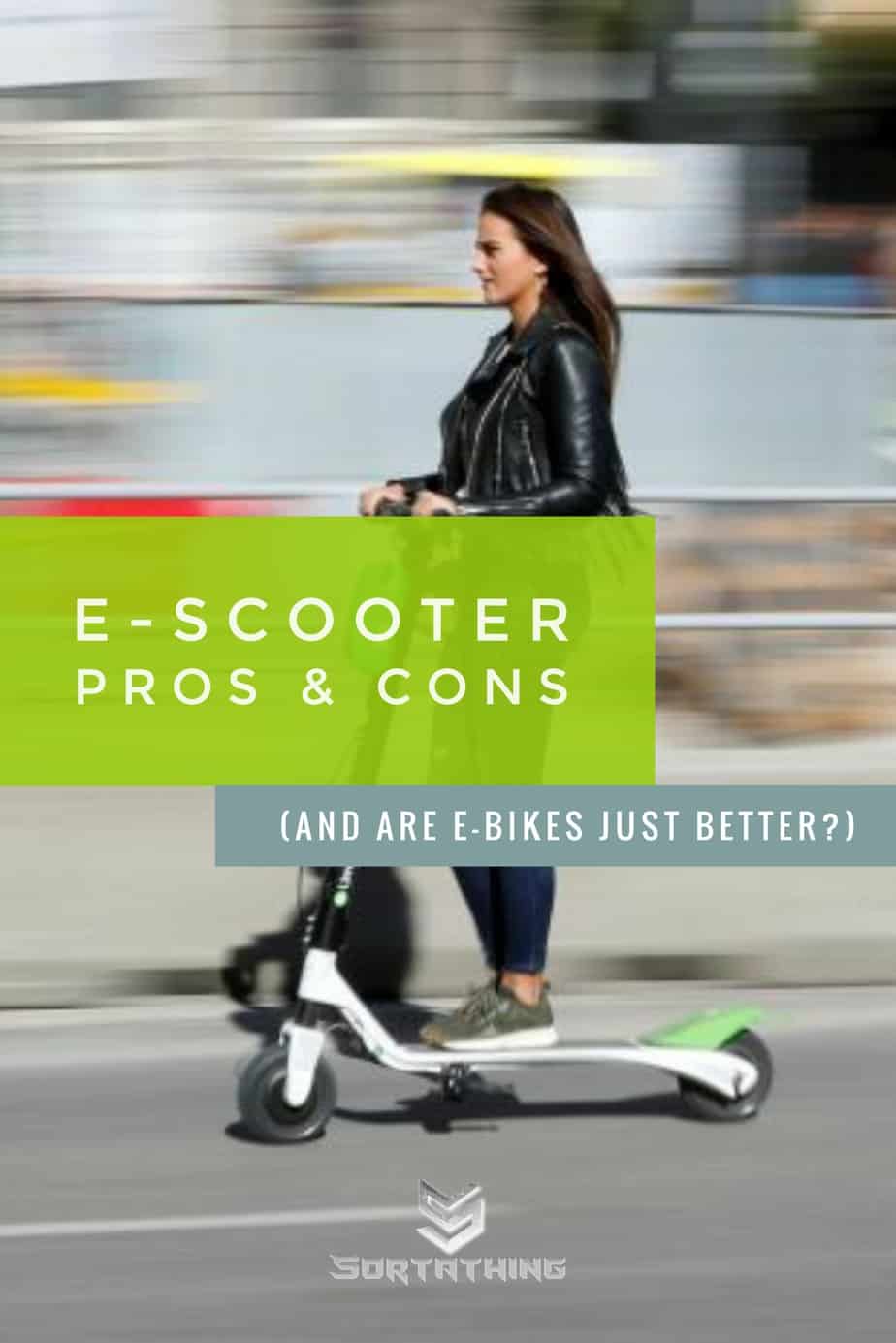 Electric scooters are fun, but are they practical?

+ Electric scooters are compact and easy to store
Not only are they easy to carry they’re also easy to store at home or in the office, especially the folding types. Even taking your scooter with you on the train, bus or in a taxi is an option. This flexibility is a real game-changer.

+ Easy to ride
Riding a bicycle takes practice, confidence and a few hard knocks along the way. A scooter is way less difficult to master, even for a complete novice. It’s like walking, without moving your legs. Pretty easy.

+ Electric scooters are (generally) less expensive
Sure, there are e-scooters on the market that cost thousands of dollars, but that’s unusual. Most of them are on sale for well under $1,000, which is the starting price for pretty low-spec e-bikes. It’s because they’re so much simpler to design and build, with fewer components.

I had to buy a new front axle for one of my e-bikes this week and it came in at $50 – that’s about one-tenth the cost of an entire electric scooter, for one tiny component. It soon adds up.

–  Electric scooters are not all-terrain

Small wheels, lack of suspension and power mean that electric scooters are only viable on well-surfaced roads and cycleways. Forget about riding you e-scooter out of town and up a mountain trail.

You may be able to hand a bag off the handlebars or carry your stuff in a rucksack but loading up a scooter with a week’s shopping or camping equipment is not an option.

Those small wheels and lack of gears will see your power that’s perfectly adequate on the flat and mild inclines quickly fades on serious hills.

Most electric scooters will carry you for a maximum of 10 to 15 miles between charges, maybe 20 if you’re light and a have a following wind. This is around half what you can expect from an electric bike.

On the other hand, charging is comparatively quick with their smaller batteries, which will reduce your downtime.

E-scooter riders generally stick to pavements, cycleways and other motor traffic-free routes, and stay out of trouble that way. Riding an e-scooter on a busy road is a hair-raising experience, it’s not as nature intended.

E-bikes, on the other hand, make their presence felt in traffic and offer some protection, enough to give you a fighting chance in an accident. Scooters… not so much.

Riding an e-scooter is kind of passive. The rider stands still and the scooter does all the work. It’s cool, but kind of unnatural and, over long distances, a little boring.

The interactivity of cycling – steering, pedalling, climbing on and off, makes it a more involving experience that you enjoy over very long distances. E-scooting is a heck of a lot of fun for the first few miles though.

Who should buy an electric bike?

If you have a couple of thousand to spare, a longer distance to cover, luggage to carry and a desire to ride your bike in a wide range of conditions and terrains, an electric bike is for you.

Who should buy an electric scooter?

If your budget is limited, you don’t need any extra exercise, your journey is short (under 10 miles) and your route is level, well-surfaced and traffic-free, and you have limited space at home or away, an electric scooter will do all you need.

Both electric bikes and electric scooters are breaking through into public consciousness in 2020 because they offer a quick and easy means of travelling while maintaining social distance, reducing costs (after the initial purchase), boosting freedom, resilience and independence and having a little (OK, a LOT) of fun along the way.

Think it through, make your choice and get out there already!

Heya i’m for the first time here. I found this board and I find It truly useful & it helped me out much. I hope to give something back and aid others like you helped me. Here is best airfryers for 2021: https://www.youtube.com/watch?v=4AeACF-1w9A